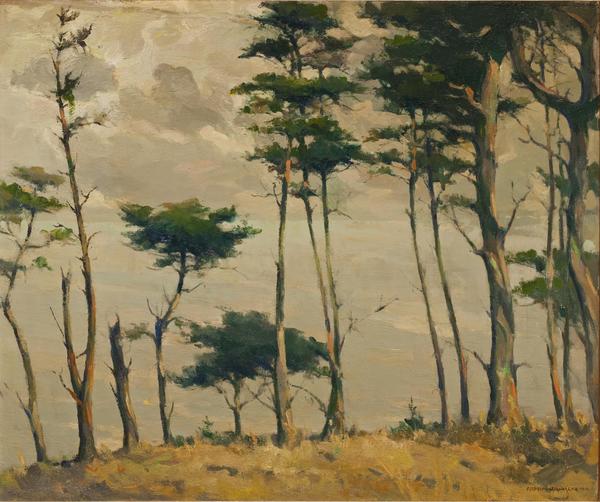 Illustrated: Armin Hansen: The Artful Voyage by Scott A. Shields, PhD., page 25. Published on the occasion of the exhibition.

"Before Hansen, when artists painted Monterey scenes with workers, they most often depicted them in connection with the historic Carmel Mission or quietly performing agricultural chores in peaceful harmony with the land, evincing the lingering influence of the French Barbizon style that Tavernier introduced in the mid-1870s. Such paintings were popular because they were soothing and restful, offering an oasis of tranquility and escape. These evolved into pure landscapes focusing on the beautiful coast, with attention accorded to the wind-sculpted Monterey cypress trees clinging to rocky shores. Hansen, who saw himself as part of a new generation, painted pure landscapes infrequently…when he did depict the cypress or pine, he tended to organize the trees into abstractly patterned groups rather than depict them as single, arboreal curiosities…"

Armin Hansen: The Artful Voyage, Scott A. Shields, PhD.
Please visit us at our following locations: